If you have a motocross dirtbike then the chances are you will already have a bike stand, either that or your leaning it up against the garage wall which isn’t the best way to treat your mx bike. Whilst your bike is in the garage, or in the pits waiting for your next race, you want to ensure your motocross bike is on a nice sturdy stand that wont allow your motorcycle to fall onto the floor, which could potentially damage a handguard or break a lever, or worst still jam your throttle when you next ride as the impact caused some unseen damage. Least of all, your want to ensure its nice and safe whilst you wash it after a hard days dirtbiking!

In this post, we cover the top ten motocross bike stands – get the most popular and trick looking stands for your dirt bike available. If you know of any we have missed, ensure to leave us a comment at the bottom of the page and we will add it to the list.

High quality steel constructed MX Paddock Lift-Stand with an additional damper to slow the descent of your dirtbike when lowering.

Rubber upper deck with adjustable height to adapt to most full-size off-road dirt-bikes as well as youth/mini bikes.

Rotating upper deck to allow movement of the bike during maintenance.

Locking mechanism to secure the stand and prevent accidental lowering of the bike. 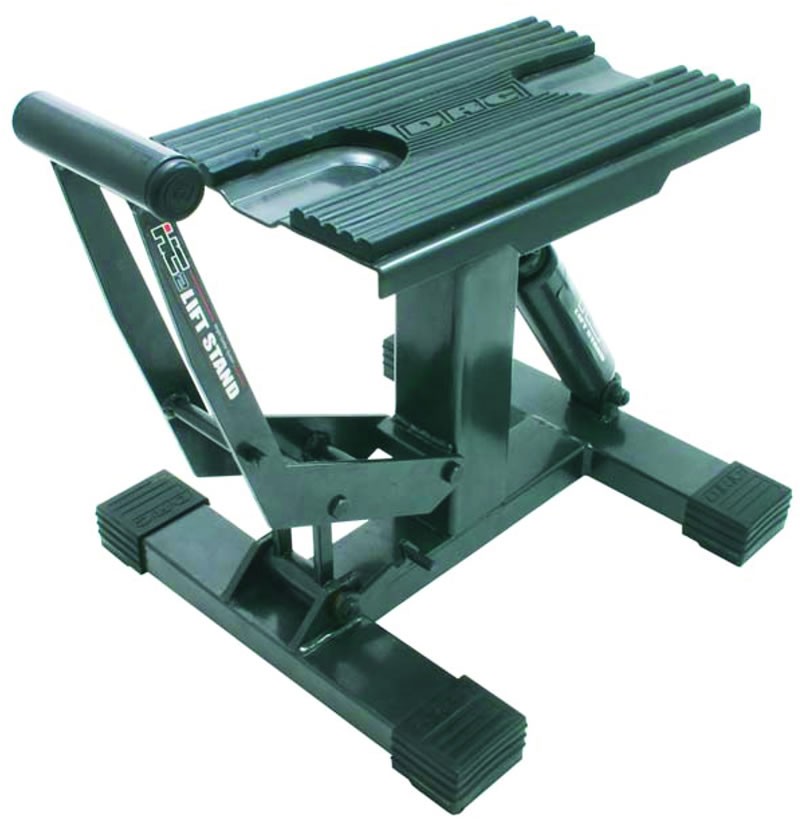 Sales for this mx bike stand always increase near Christmas and its easy to understand why. The dirt bike stand is extremely robust and solid, with a locking height adjuster ensuring you get the “perfect fit” for your motocross bike. The rider simply slides the stand under their bike and uses the jack pedal to raise the stand, lifting the dirt bike off of the ground. The action is very reassuring due to the excellent build quality, and the stand even comes with a damper – how cool is that!  This stand is the top choice from us, in fact its what we have been using for the last 5 years and its still going strong.
Take a close look here – DRC Motocross Bike Stand

Available in Black or White, easy to store and carry. 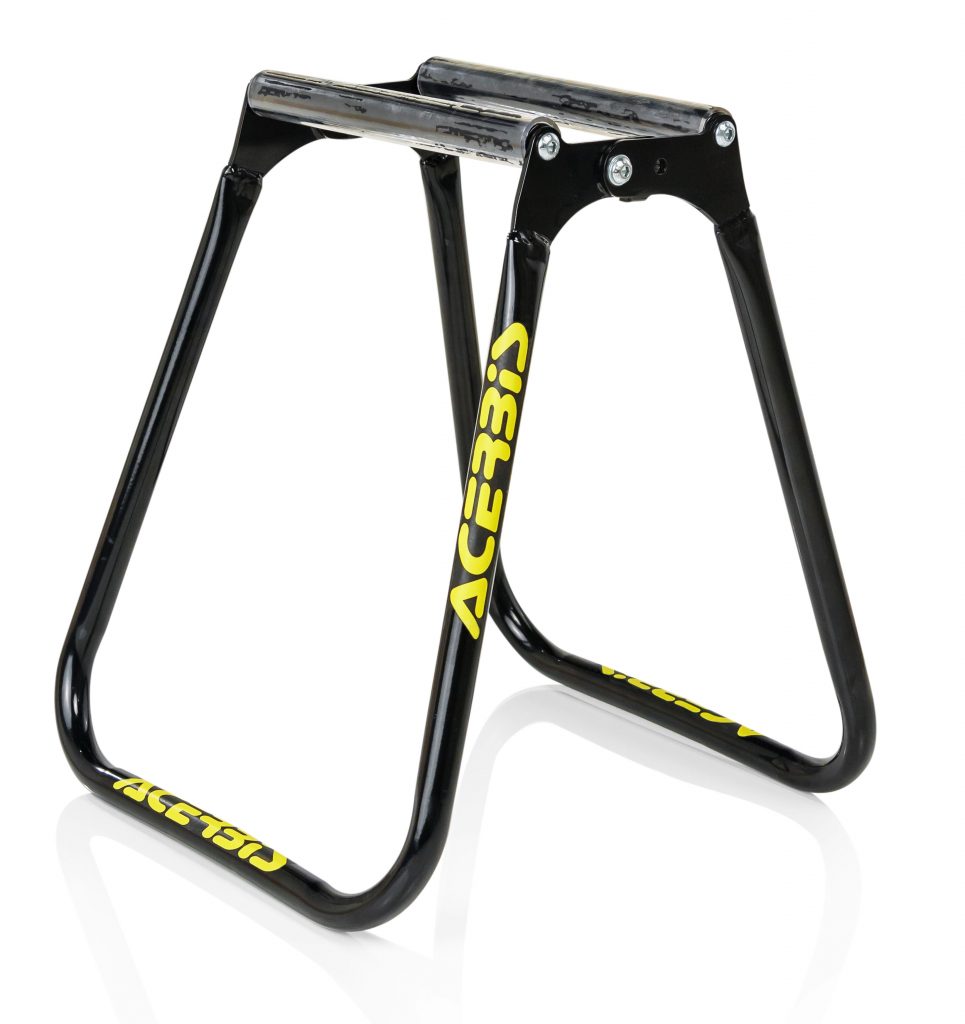 Available in 5 colours to match your mx bike.

A durable plastic motocross bike stand that features a removable block that can be mounted on top to accommodate dirtbikes with frame rails that are not parallel to the ground. 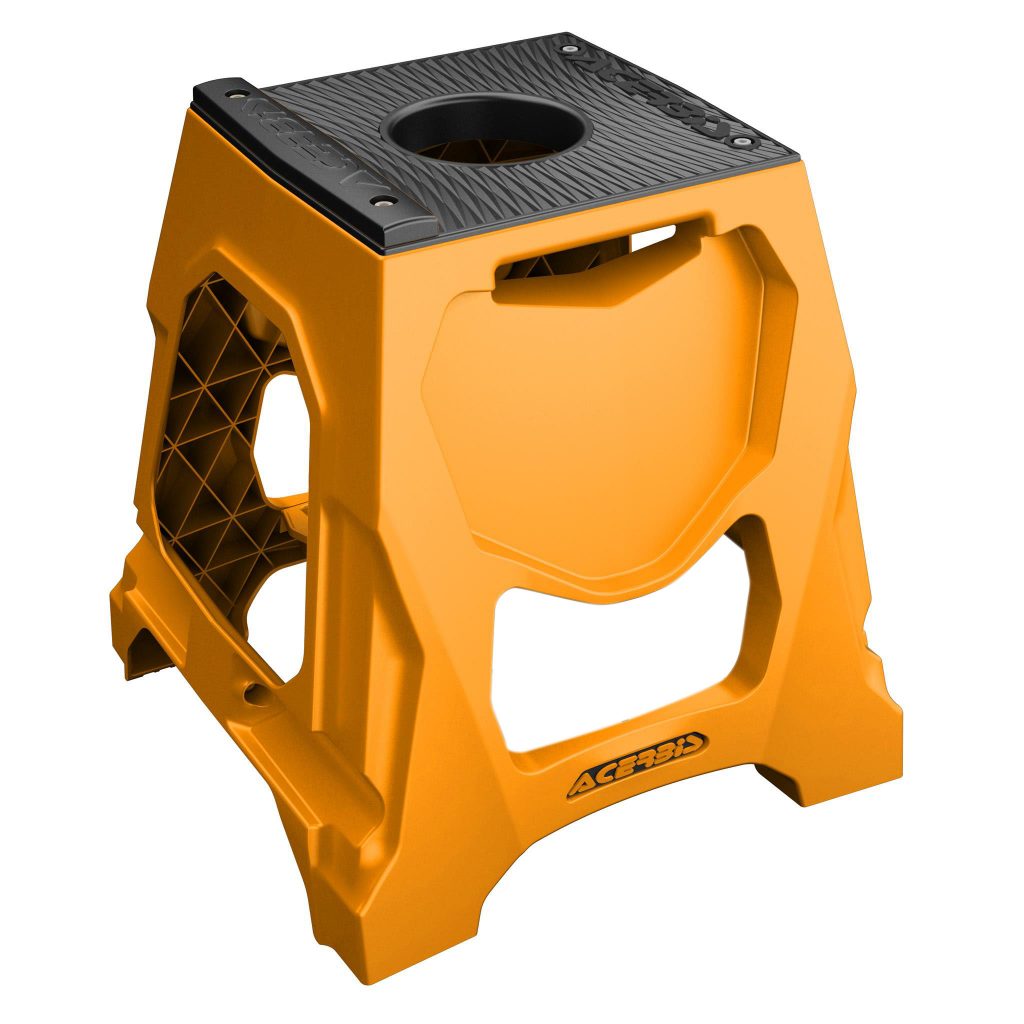 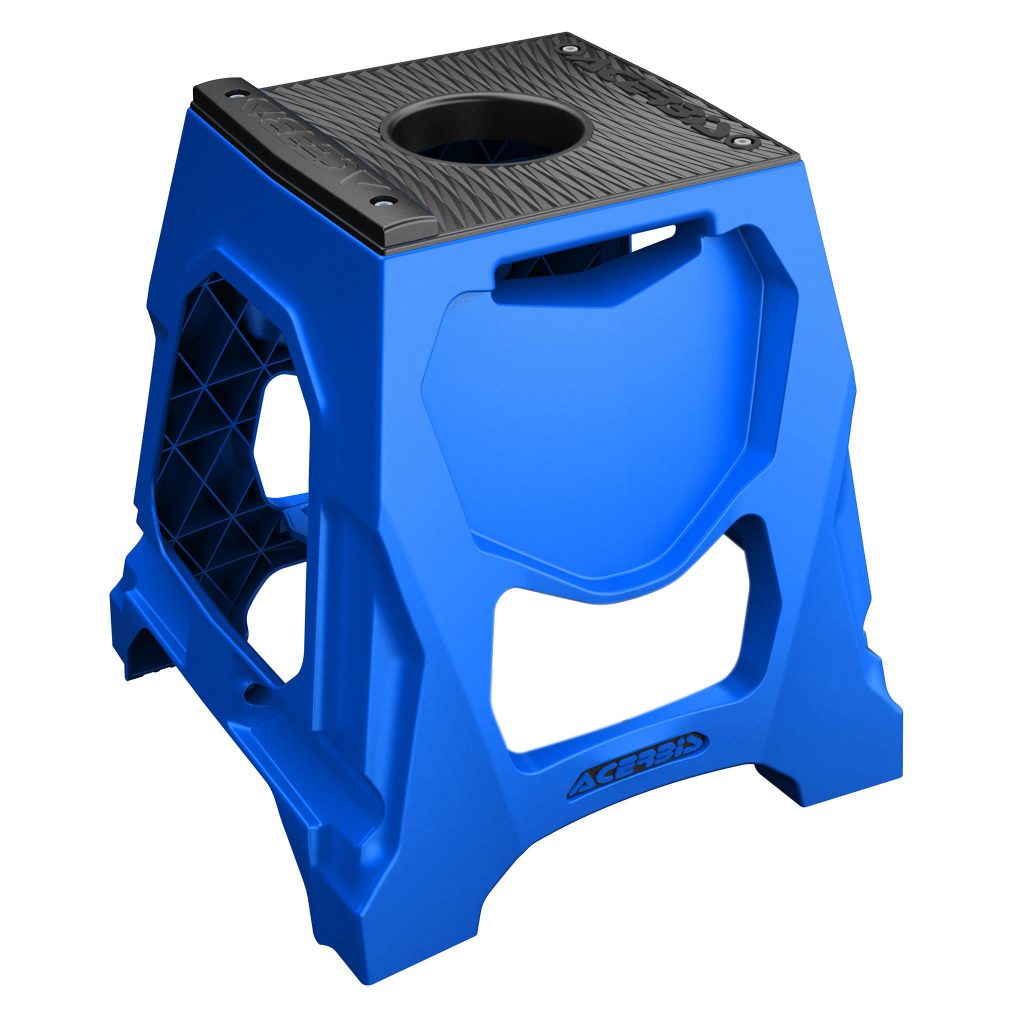 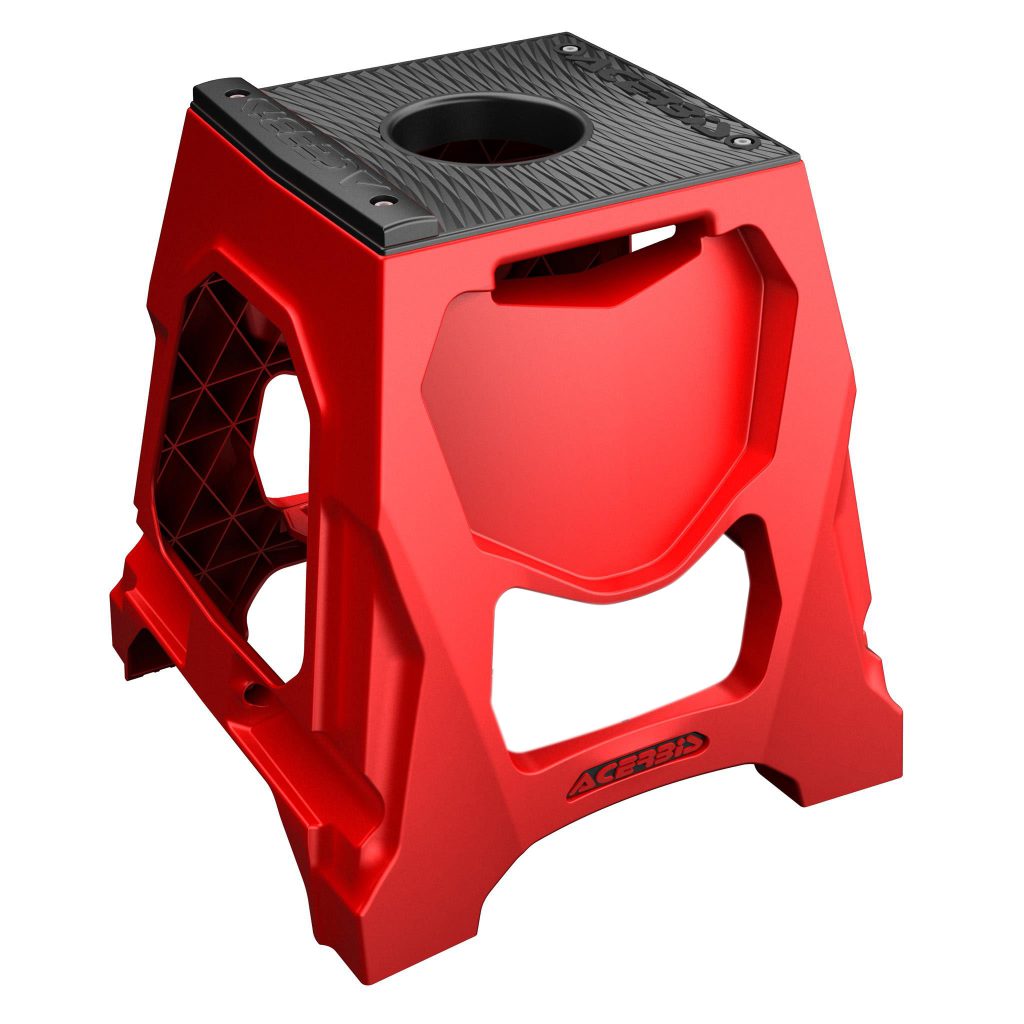 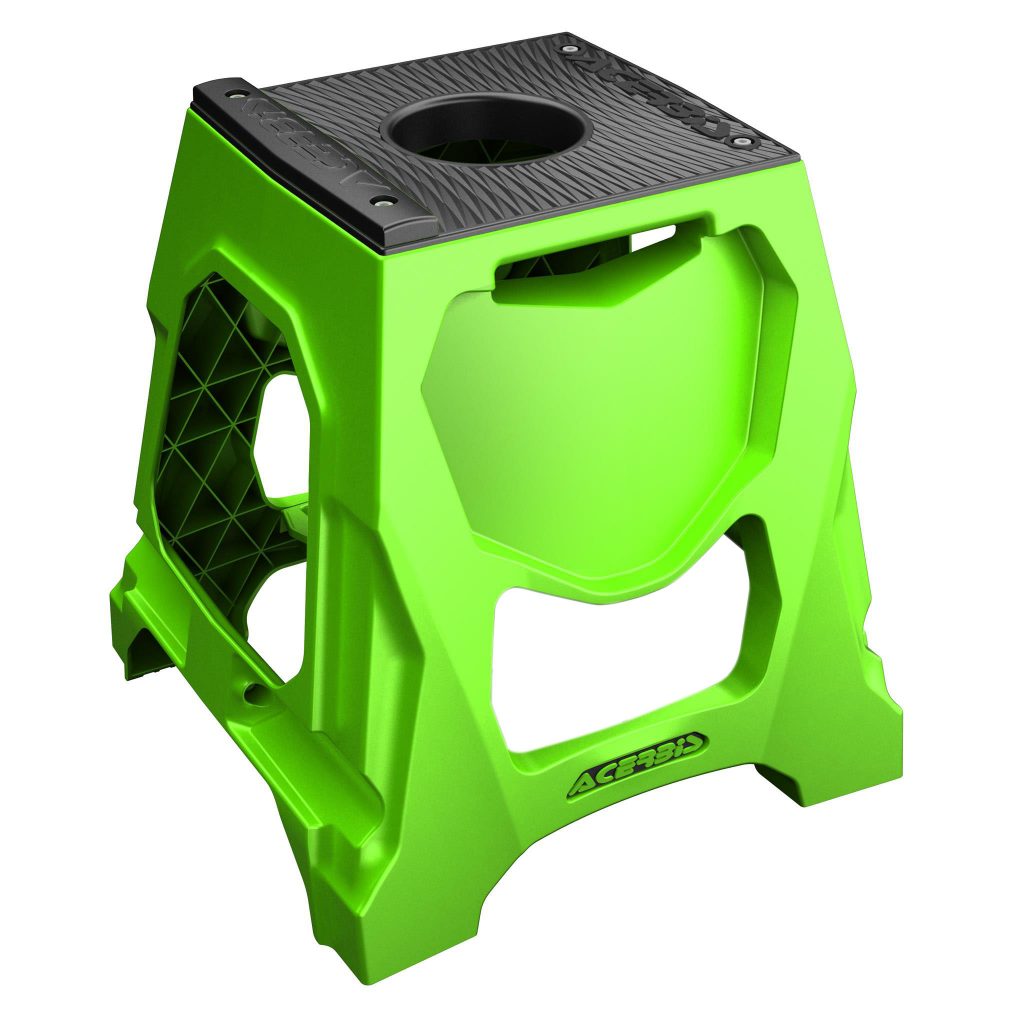 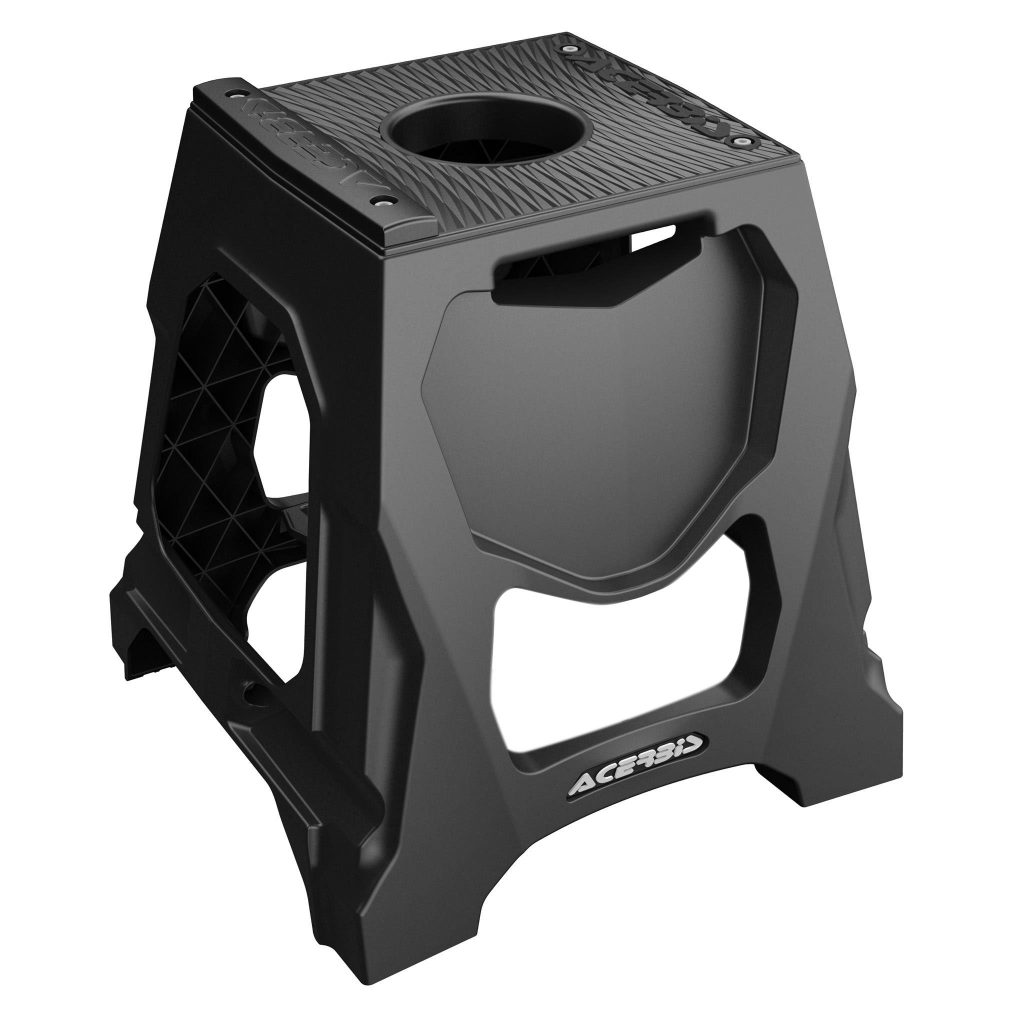 Also ideal to use whilst camping or sitting doing some bench racing! 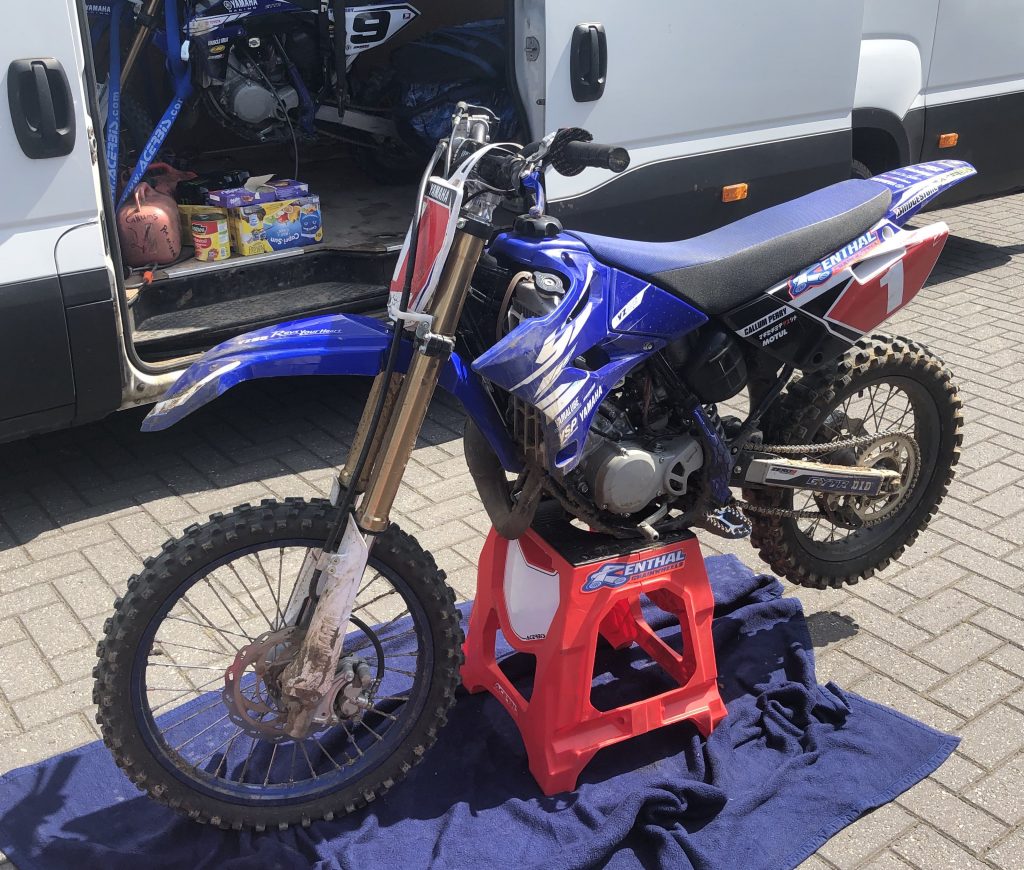 Coming in at less money that the DRC MX Bike Stand is this Orange stand from Biketek. It has a jack up handle to lift the bike from the ground, which makes it easy even whilst your dirtbike is covered in mud. There is also a handy tool or nuts & bolts tray built into the bottom of its base. The stand is actually rated to lift a higher weight than the DRC stand, with a published max lifting weight of 180kg.
The stand is available in our shop here – Motocross Bike Lift Stand 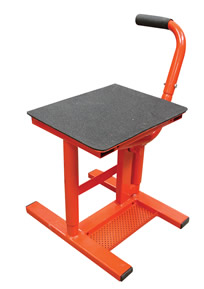 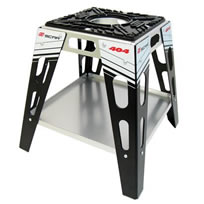 Sturdy, Ultra Light and can easily be dismantled, this stand will make you look and feel like a pro in the pits. Made from machined aluminium and with a anodized finish, this Scar Racing mx bike stand hits the spot!

The coolest motocross stand on our list but also the most expensive, Ill leave it upto you to decide if riding straight off of the track and onto the stand is worth the price. As the front tire rolls onto the front plate, the lift springs into action, raising itself to the bottom of the motorcycle frame. Step on the foot pedal, and your bike will effortlessly rise into a secure, locked position.
See more photos of the motocross stand in action here 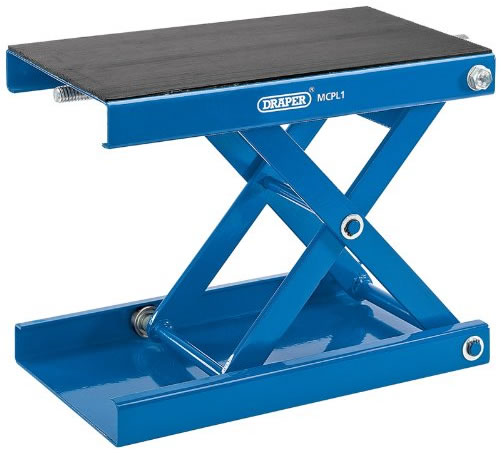 Scissor support stand suitable for use on the floor or on a motorcycle lift
Rubber mat on platform prevents damage to underside of machine
Fitted with ball bearing rollers for smooth lifting and lowering
Platform size: 380 x 230mm
Minimum to Maximum Lifting Height: 84mm – 356mm
Comes with a instruction manual

Available In Lots Of Colours

Since Polisport’s foldable bike stand was launched, it has been featured and reviewed by industry publications all over the world, it has been used by many professional team and it was also the FIM Motocross World Championship Official Podium Bike Stand. A place it deserves for being a champion. The reasons for this success are quite clear. No other bike stand offers such a package of lightness, practicality and strength. Garages became roomier, vans and trailers grew to be larger and pits were made prettier. 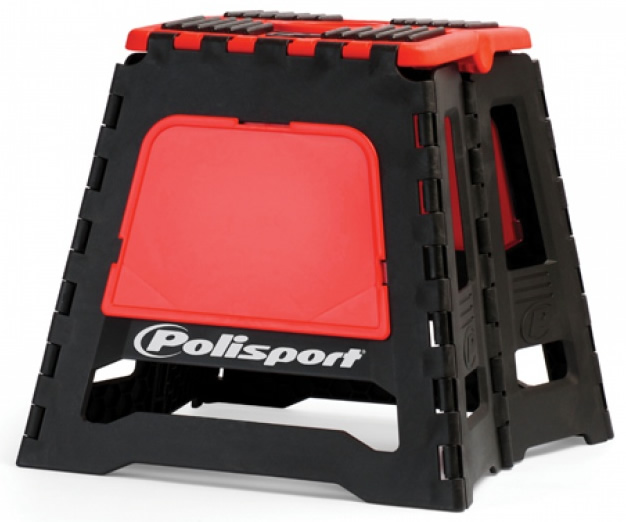 Acerbis phone stand in mx stand design. Ideal for your desk or workbench. 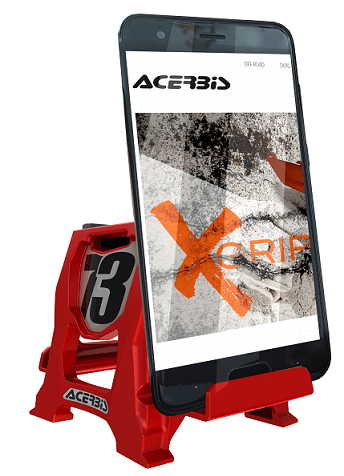